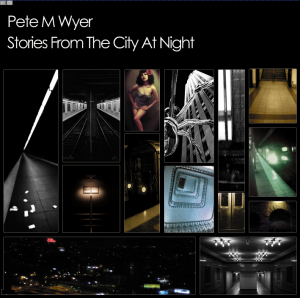 “We attach meaning to events, but events happen in the universe and meaning happens in the human heart”
From “Subway Nightride”

Stories From The City At Night was released by Thirsty Ear Records on October 21st 2008.

Review from All About Jazz, by Lyn Horton:

“A record is judged a success when it creates its own context, which it upholds with content. If the content stretches only to the parameters of context and not beyond, there is a sense of limitation to the album. But in Stories From The City At Night, the mixture of music, prose and sound transforms the album into a sieve for imagination, catalyzed by the meaning behind the very first story (“Rain At Night”).
The development of a story is akin to the way in which a suite of music is composed, beginning with an overture, an introduction, and followed by the gradual unfolding of each successive movement or chapter. Here, each story changes in color and mood, but is still understandable, both literally and metaphorically, as a facet of the whole.
The recording begins with the sound of a helicopter, forming a ceiling for the world highlighted by the narrative, and signifying perhaps that the sky is also the limit in terms of compositional freedom. The helicopter also provides an able vehicle for entering and experiencing this world. A male voice accompanied by luring symphonic strings provides a smooth transition into specific scenes. The clarity of the plucked guitar breaks the overture with a tinge of Spanish overtone, and personifies the conceivable isolation of a single person in New York City. Siren-like female voices interweave with the blue, yearning sultriness of a tenor sax. The sounds of rain, thunder, a husky male voice, grand orchestral surges and a further mixed chorus frees the listener of preconceptions; and offers comfort: a place to settle, a means to groove.
The melancholy (“Somebody”); texture and pace (“Dina’s All Night Diner”); dark tonality (“East of Manhattan”); ethnic character of alternating male and female voices poeticizing the stories; and completely unanticipated, yet appropriate employment of sound effects (“Night Ride by Subway Car”) facilitate the rapt attention necessary for rendering the listening experience both coherent and intriguing.
This record takes us somewhere culturally, like the train that moves throughout the city. Folk (“Here I Am”), avant-garde and jazz (“Dina’s All Night Diner,” “Pier 45, Part 1”), electronic, minimal, improvisation (“Night Ride by SubWay Car,” “Pier 45, Part 1”), even German operetta (“Nobody”). Each musical cell represents a distinctive fictional picture. The recurrence of the guitar chords (“Pier 45, Part 1”) and the prevailing winsomeness derived from the string quartet (“Pray for Me”) recalls the solitude of the present journey. Amidst sloshing of water, the sound allusion to penumbra and streetlamps creates an image of strange and mysterious pathways to follow.
The tender explosion of guitars, electronics and drums that swoop into a chorale of female voices (“Pray for Me”) and the sonic revival of rain lead to an inevitable conclusion: the end of night. The whir of the helicopter blades takes us out of the city. Now, perhaps, it is time for our own night of sleep and dreams.

“Pete Wyer, storyteller, composer and master of the spoken word, brings you through a journey showing the sights, sounds and moods of New York City. Employing an assembly of talented voices and a score of music that is at once introspective and far reaching. He has devised an audio tour through the city, as seen and experienced by it’s characters and complimented with a soundtrack evocative of city life.

An album 3 years in the making, this CD is meant for anyone that has ever visited New York, or really any major city. It’s for anyone that loves a good story. It’s for someone that needs more out of music, and for the cerebral tourist in all of us.”

Listen to some of the tracks over at Myspace.com

Buy Now from AmaZon or iTunes Below: 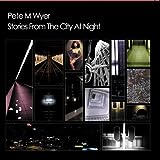