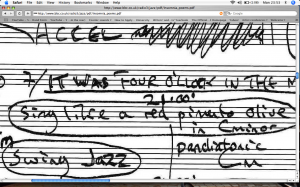 In 2004 I began creating Simultaneity works: works which made recordings at the same time in different locations. The first recordings took place around Columbus Circle, New York – I mapped out a circumference that passed through the Time Warner building and around the periphery of Columbus Circle itself and, with the help of a team of volunteers from WNYC radio, made a series of simultaneous recordings that, when played back across multiple speakers, gave what I described as a ‘God’s ear view’ of the location – we experienced being at all points simultaneously; cars, subway trains and people moved from speaker to speaker, we heard the endless rotation of revolving doors that interfaced the very contrasting sonic landscape of the interior of the Time Warner Building with the bustling Manhattan streets outside.

This led to me Simultaneity recordings that were not made in the same location: in December 2004, with volunteers primarily from CEC Canada’s online forum, a recording was made simultaneously in countries around the world: I asked volunteers to record twenty minutes of their environment, but to include something that marked the hour changing – people were extraordinarily resourceful, I received dawn choruses with distant tolling bells from Australia, railway station announcements from New Zealand, in San Francisco someone put a stereo microphone within a clock in a clock shop, in New York someone kindly recorded herself saying ‘time now 1.00pm’ after the bells failed to sound in Police Square, Manhattan – I received sounds of evening traffic in Europe, someone recorded the backstage at English National Opera, London, with the countdown of calls to curtain up. From further east came recordings of late night rains in Tunis and later night chatter in Mumbai, the teeming jungle sounds of Laos, to far northern sounds of dogs barking in the remote reaches of northern Alaska. It added up to a complex array of sounds that coalesced into a moment of intensity as the hour struck and then dissipated back to the ambient environment.

This was all very well, but then two things happened: the first was the thing that happens to all arts projects that are not an easy fit and don’t have an attachment to an institution of some sort: it lost it’s funding, but, secondly, while I liked exploring things that made us listen to the sounds around us in different ways, I was, from background and profession, a composer – people kept asking me, I kept asking myself: where is the music?

I was up very early one morning. The dawn chorus was at its zenith and I was struck by the beauty of it with it’s endless combinations and re-combinations of songs. It made our conventions of music feel limited, restricted and I began thinking about systems that would enable simultaneous solos that combined in musically intelligent, coherent ways.

In 2005 I began making the first Time Structured Maps – these used the same basic scores as might be used for an orchestra but each bar-line represented a period of 30 seconds rather than a count and each ‘bar’ consisted of a set of instructions for how to improvise during that time period, which might be very specific or left ambiguous. The result was a system that enabled musicians from all backgrounds to play together, and to incorporate other forms such as dance, speech etc within a score.

The first significant try out for the system was with the Orchestra Of The Swan with a Time Structured Map (TSM) based work called Traveller, There Are No Paths, Paths Are Made By Walking. It is a hard thing to ask seasoned professional musicians to improvise: it asks them to do things they are not trained to do, worse still, it asks them to bring something personal and individual, whereas orchestra players are mostly concerned with renderings and interpretations of music that are guided by a conductor and from a very specific notation system. It’s to the credit of the orchestra that they agreed to do it at all and the results were coherent and encouraging.

A second, much more ambitious work, Four Bridges, was performed in November 2005, it combined the ideas of Simultaneity with the Time Structured Mapping system: the Orchestra Of The Swan played from the score in England while pianist Burkhard Finke in Frankfurt, microtonal vocal specialist Toby Twining in Boston and Indian Classical singer Anand Thakore in Mumbai performed simultaneously from the same score, without hearing each other – each performance was recorded and later combined into a work for 8 speakers.

Inevitably, funding again became an issue, after 2005 I returned to producing scores for opera, ballet and television and making somewhat more conventional albums (such as ‘Stories From The City At Night’ for Thirsty Ear in 2008) but I maintained an interest in the system and in 2009 I made the one-hour Insomnia Poems for BBC Radio 3 (Jazz On 3) which combined post-beat poet Steve Dalachinsky with a five-piece band consisting of soprano, Evelyne Beech, electronics and processing, Mike Cross, clarinets and saxes, Chris Cundy, bass, Robert Perry and myself on guitar, piano with found sounds and manipulations – each of us performing with a synchronized stopwatch on our music stand. The piece was popularly received and what excited me about the results was that it retained the energy and spontaneity of improvisation within the dynamic and tonal structure that we would expect of a conventionally scored piece – the hope was always to end up with the best of both worlds.

Since then, the Arts Council Of England, who originally declined to fund the project, causing it to stop in it’s tracks, have funded workshops which have in turn led to new works using the system: Welsh National Opera have commissioned a series of educational works using the system, which will accompany their autumn tour and with a further commission from the Orchestra Of The Swan I am producing a series of TSM scores based around four Shakespearian sonnets that will firstly be performed and recorded by the orchestra but will subsequently invite members of the community to submit their own improvisations based on the TSM score, to make a second version.

The flexibility of the TSM system offers an opportunity to combine musicians from very different backgrounds, as well as disparate ensembles with, for example, players of very different standards. It allows me to create works that combine improvisation with conventional scoring and that move easily from one system to the other. This in turn leads me back to where I started – it allows for the creation of works that are spatial – TSM scores make it relatively easy to create works that have a ‘Worldwide Orchestra’ that can be made up of players from a vast array of backgrounds in any location that can connect to the internet and it allows for the creation of works which redefine the conventional relationship of the composer with the musician and indeed, of the combination of music with other formats such as dance and drama.

Four Bridges was showcased on WYNC and you can Click here to Listen to this Show.