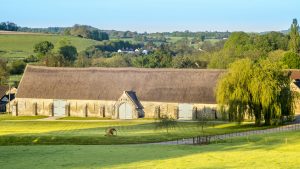 Song of the Human  – Composed by Pete M. Wyer

Messums Wiltshire, the acclaimed new arts centre housed in a restored tithe barn, will open the third and final part of its series exploring the human form with a unique immersive choral work, Song of the Human, by composer Pete M. Wyer. A UK premiere, Song of the Human is inspired by the idea of how we communicate in music and the restorative power of birdsong for the human mind.

Song of the Human, which was premiered in New York last October at the World Trade Center, is created within a sonic installation. Visitors to the vaulted space of the great barn, with its cathedral-like acoustic, will experience music performed by Philadelphia-based choir The Crossing amidst a dawn chorus of birdsong.

The work was inspired by the music of the speaking voice and its comparison to the virtuosity and intricacy of birdsong. This led composer Pete M Wyer to discover the theory that human speech is in part evolved from birdsong; the work uses the music of human speech to investigate the nature of being human and the human as part of nature. Charles Darwin wrote: ‘The sounds uttered by birds offer in several respects the nearest analogy to language.’

Song of the Human is: “An extraordinary sonic experience…we are amidst the dawn chorus, wind, a passing storm, and then there are humans, who have a different sort of music it would seem, but Pete has found a connection between birdsong and human speech.” John Schaefer, host, ‘New Sounds Live’, WNYC New York

Song of the Human

The installation at Messums Wiltshire features unique recordings of the English dawn chorus, recorded simultaneously with 18 lines of audio in Cornwall, Suffolk and Dulwich woods, London, and also includes a chorus of extinct birds.

The work also aims to reproduce the restorative effects of birdsong for psychological wellbeing. People find birdsong reassuring and calming because thousands of years ago, and still in some wild places in the world, birdsong signifies safety based on a lack of predators, and plentiful resources for survival. So low-level anxiety is often experienced when people cannot hear birdsong.

Song of the Human received its world premiere in Manhattan on October 12, 2016, presented by WNYC’s New Sounds Live, John Schaefer, at the Winter Garden in the World Trade Center.  Concert broadcast and interview: http://www.wnyc.org/story/3916-new-sounds-live-pete-m-wyer-song-human/

The piece is composed in seven movements. In the first movement, Wyer’s intention is to create a feeling of encountering other humans as though they are a different species. In the dramatic penultimate movement the choir battles the elements in the form of a storm, acting as a metaphor for the struggle we each face in reaching a point of acceptance of our own nature.

1) The idea that birdsong offers the nearest analogy to language was advanced by Shigeru Miyagawa, Professor of Linguistics at the Massachusetts Institute of Technology (MIT) in Boston. MIT News, December 2016: “A contemporary example of the influences between scholarship and art is ‘Song of the Human,’ a new musical work using birdsong, human voices, and found sound, for which British composer Pete M. Wyer drew on the research and hypotheses of Shigeru Miyagawa, a professor of linguistics in the MIT Department of Linguistics and Philosophy.” (http://news.mit.edu/2016/song-of-the-human-origin-story-1213)

2) Birdsong is also nature’s alarm clock, with the dawn chorus signalling the start of the day, so it stimulates us cognitively ‘The Surprising Uses for Birdsong’, BBC: http://www.bbc.co.uk/news/magazine-22298779.

Part I of the series, Conceal | Reveal, was a dance performance by the internationally renowned Russell Maliphant Company. Part II was Deformation l Transformation, in which Laurence Edwards, Sean Henry and Brian Taylor explored the language of figure in medium of sculpture.

Messums Wiltshire is situated in the largest example of a monastic barn in the UK, dating from the 13th century. It has been extensively restored and opened in September 2016 as a centre for showcasing creativity and experience in performance, design and art. www.messumswiltshire.com