Skip to content
It was a wonderful thing. In Boston in 2022 we brought together soprano, Mary Rose Go who plays ‘Tsering’ in Ga Sho (May You Be Loved) with Ngawang Sangdrol the real life Tibetan nun whose story inspired the work.
Sangdrol was first imprisoned at age 13 in Tibet. Managing to record songs with other nuns while in prison eventually led to her release after 11 years. Some of the other nuns did not survive. Working on the project has been very humbling and challenging. Sangdrol (re)recorded one of the songs from the prison for the opera in October 2022; during the session she was moved to tears, she said she kept seeing the faces of those who recorded but did not survive.
We record four of the other surviving nuns next year, in Antwerp.

“Prison became our nunnery and the prison guards were our gurus.  The Buddha taught that an enemy is the best teacher, because only when someone is cruel to you can you truly be tested on your practice of compassion toward all sentient beings. No matter our sufferings, our spirits were far from broken.”  – Ngawang Sangdrol

When  Ngawang Sangdrol was 14, she again protested in Lhasa, the capital of Tibet, with a small group of other nuns and monks. They were all immediately arrested.  She falsified her age so she wouldn’t be separated from her sisters, even though this meant she was sent  to the notorious Drapchi prison. Her initial three-year sentence was extended many times (eventually reaching 23 years) because of her acts of protest.  She was punished almost daily with beatings, torture and solitary confinement, at one time spending six months in a hole in the ground, open to the elements.

During incarceration someone smuggled a cassette machine into the cells and the nuns recorded songs to let loved ones know they were still alive.  Unbeknownst to them, once smuggled out, the songs became the focus of an international human rights campaign.  Eventually, after 11 years in prison (during which several of Sangdrol’s fellow nuns died) she was released to the US for medical treatment. Once there, she immediately received asylum. The songs had ultimately led to her release.  Her story has an improbable (but true) Hollywood ending. After she settled in the US, one of the young men with whom she was originally arrested went to great lengths to search her out — they fell in love, married and now live in Boston with their son. 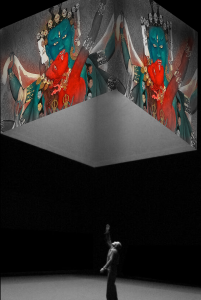 Ga Sho places the performer and the audience within a surround of 24 independent audio speakers: sound may emerge from anywhere and may transform from the harsh external realities of solitary confinement in a brutal prison system to an inner world of choruses of voices, authentic Tibetan rituals and chanting, the voices of lost friends.

The woman – Tsering – has been in prison since she was 14, often in solitary confinement for her defiance of the guards. She survives by holding close to her mantras, her memories of family, her devotion to her fellow prisoners… and her belief that her torturers are her greatest teachers in the practice of compassion.

After the prologue,  we open on Tsering in solitary confinement – a hole, a cell with no ceiling, open to the elements. Bright lights are trained on her at all hours – a square of light, center stage. Tsering pulls threads from her garment, rolling them into prayer beads. Gradually we hear the rain spread across the space. We see her react, shivering, no shelter. 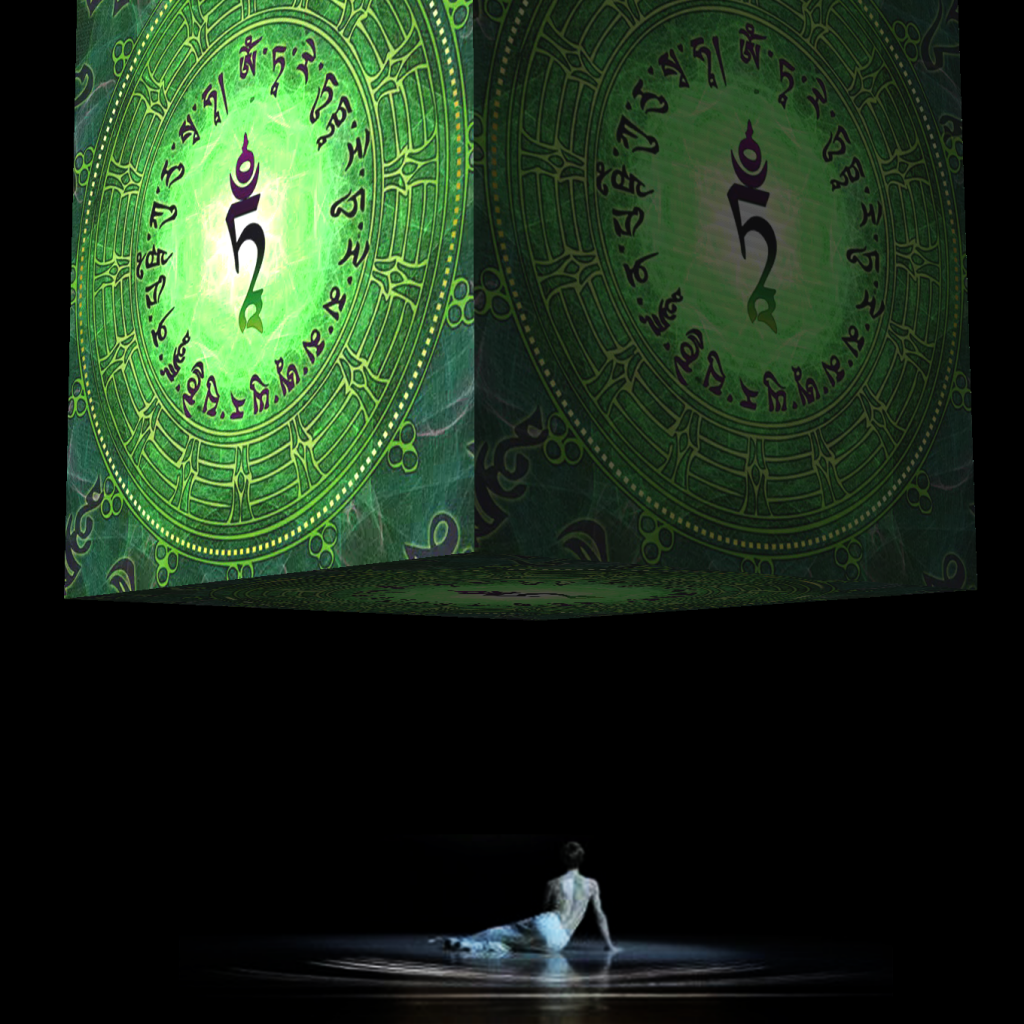 She begins to chant the Green Tara Mantra… Om tare tuttare ture soha… Colour pours into the world through projections that surround Tsering. We now hear a large choral ensemble, and Tsering begins to dance throughout the space – it builds and she’s in a trance, protecting her from the rain and her circumstance.

The chorus comes to a screeching halt as we hear footsteps approach and a guard yells at her. Mid-dance, Tsering freezes… and she’s back in her small square of light. A snap transition as she huddles on the floor, making her prayer beads, softly repeating her mantra.

In 70 minutes, we share Tsering’s struggle for compassion and survival. Through an intricate audio design of authentic Tibetan chanting and traditional music, Western choral music, natural sounds and dialogue, along with large scale animated projections of the wrathful and peaceful deities of The Tibetan Book of the Dead, we take a sweeping journey that ends with Tsering’s release… as her songs unexpectedly lead to her freedom.

You can hear excerpts from the show by hitting the links below:

We begin surrounded by the sounds of chanting monks, it cross-fades into a haunted memory, pursued by helicopters, Tsering wakes…

In solitary confinement Tsering chants day and night to Green Tara, a boddhisattva of compassion:

In accordance with her teachings, Tsering prays for her torturers:

4 Projectors with projection screens as appropriate to the space

Song of the Human by Pete M. Wyer

“Song of the Human,” commissioned for the Winter Garden by WNYC’s New Sounds Live and premiered October 2016. It was both a choral work, featuring the 16 human voices of The Crossing, and an 18-channel sound installation. It used the same technology to deliver sound above, around and below the 16 palm trees on the main atrium at the Winter Garden. 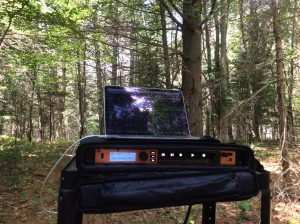 I Walk Towards Myself by Pete M. Wyer

“I Walk Towards Myself” is a work for the Wild Center in upstate New York. It opened to the public on May 27, 2017 and will remain in situ for up to 3 years. It features 3 choirs of 24, each singing in Mohawk, with voices individually recorded and played back throughout a specially designed walking trail. It uses 24 independent all-weather speakers, hidden in the woodland, which run through independent amplifiers via two Cymatic uTrack 24 interfaces.

Pete M. Wyer has created scores for the London Symphony Orchestra, Royal Philharmonic Orchestra, Juilliard and Royal Opera House as well as seven operas and music theatre works. Pete’s innovative, Manhattan-wide And Death Shall Have No Dominion, a setting of Dylan Thomas for the centenary of his birth in 2014, was performed by a synchronized headphone choir distributed across Manhattan, co-ordinated via a specially created app on smartphones and tablets.

He has specialised in immersive sound since his 2004 work Simultaneity which featured 42 recordings made simultaneously in different countries around the world leading to numerous new immersive works including a 2016 commission by WNYC’s New Sounds Live to create Song of the Human as both an installation and concert work which was performed by The Crossing choir with an immersive soundscape at the Winter Garden, Manhattan.

Melissa Salmons has written over 1400 hours of serial drama for television. She is a two-time Emmy winner and a four-time recipient of the WGA Award for that work. Additionally, she’s written television movies, and segments for the iconic MTV series Liquid Television. In addition to Ga Sho, she is currently working on a play about Tibet.