PETE M. WYER is a composer and musician from England whose works often involve storytelling and innovation, especially in the area of immersive sound. He has created scores for the London Symphony Orchestra, Royal Philharmonic Orchestra, Juilliard, the orchestra of Welsh National Opera, The Crossing, BBC Television and the Royal Opera House as well as creating seven operas and music theatre works.

His immersive installation The iForest opened in a permanent home at The Wild Center, in the Adirondacks in 2017, receiving 160,000 visitors and being described by Inside Hook Magazine as “Like hiking through Fantasia”. The work that currently plays in the iForest is called  ‘I Walk Towards Myself’ and features a multi-track recording of The Crossing with each voice separately recorded, creating a 72 voice choir, singing in the indigenous Mohawk language. The iForest was installed in Inwood Hill Park, Manhattan, as a part of Drums Along the Hudson in June 2018:

In 2016 Pete was commissioned by WNYC’s New Sounds Live to create Song of the Human as both an installation and concert work which was performed by The Crossing choir with an immersive soundscape at the Winter Garden, Manhattan.

The WNYC broadcast can he heard here: New Sounds Live on WNYC.

Pete’s innovative, Manhattan-wide And Death Shall Have No Dominion, a setting of Dylan Thomas for the centenary of his birth in 2014,  performed by a synchronised headphone choir distributed across Manhattan, synchronised via a specially created app on smartphones and tablets, can be seen in the film below:

In 2015 he was the composer and Musical Director for the 175th anniversary of Cunard in Liverpool and drew crowds in excess of 60,000:

The Colour Project’s animated film The Butterfly Effect, created for the Chelsea Flower Show and scored by Pete, won a silver medal at the event, the first time an award has been given to a presentation other than for plants or flowers. His song for the Olympic Torch Ceremony in Coventry, with lyrics by Nick Walker, ‘Out Of The Flame’ was performed to an audience of 20,000 on July 1st 2012. His one hour song cycle of poems by Charles Simic ‘The Invisible’ premiered at Roulette, Brooklyn on May 29th 2012 featuring Tom Buckner, baritone, Matthew Shipp, piano, Ralph Samuelson, shakuhachi, Kevin Norton, percussion with Pete playing classical guitar, synth and electronics. In 2011 he completed a four week Fellowship in Bogliasco, Italy, awarded by the Liguria Study Centre. In February 2011 he received a ‘Best Composer’ award for his orchestral score The Far Shore, at the Fringe Report awards. Pete is strongly drawn to storytelling and to innovative approaches that enable combinations of improvisation with scored music, electronics, found sounds and site-specific works. This has led to the creation of albums such as Stories From The City At Night for Thirsty Ear Records, operas and operatic works such as Cremenville, Numinous City, Johnny’s Midnight Goggles, 57 Hours In The House Of Culture and many others.

“In every festival there is the ‘one’, the Holy Grail, the great find of the whole season and in the case of this year’s mainstream [Brighton] festival it is ‘Johnny’s Midnight Goggles’ by Pete M. Wyer …..this small piece of theatrical genius that is as funny and wonderful as anything I have seen in a very long time…….This is magical, and it is comedic…. Buy, steal, beg and queue to get a ticket to this show…”

“This is a totally engaging way of experiencing music….not just the visual and special elements of the work but the way in which the performers are treating music as a form of theatre, an expression of their own emotion………The lush romantic melancholy of Wyer’s score is ravishing and the two musicians perform it responding to each other like lovers”

He has composed a number of operatic works: Gut, (Tete a Tete Opera Festival, London, 2014) Cremenville (Opera North, Resonance, 2006), La Belle de la Bete (Tete a Tete Opera Festival, London, 2013) Johnny’s Midnight Goggles, You Must Have This, Finkelstein’s Castle, Adam’s Apple . Johnny’s Midnight Goggles. He has written the book and libretto for a number of these works.

‘One of the most extraordinary sessions we have ever had ’  Jez Nelson of the one hour Insomnia Poems for Jazz on 3, BBC Radio 3, March 2009 (performed as a live set at Pinewood studios). 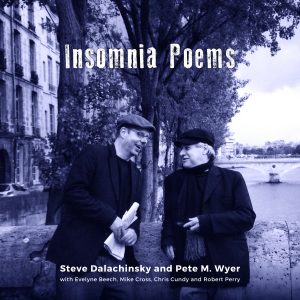 Insomnia Poems, recorded for BBC Radio 3, broadcast March, 2009 and in December, 2009, as part of Radio Three’s ‘Best of Jazz on Three 2009’ – it brought together an eclectic band, who gave a semi-improvised performance from a ‘time-structured map’. Inspired by the poems of Steve Dalachinsky ‘Insomnia Poems’  broadcast on BBC Radio 3’s ‘Jazz On 3’ in March 2009 and subsequently rebroadcast for Jazz On 3’s ‘Best of 2009’ in December 2009. The work featured Steve Dalachinsky (Reader) Evelyne Beech (soprano) Chris Cundy (clarinets, saxes, stuffed loon) Michael Cross (laptop manipulations and vibes) Robert Perry (bass) and Pete M Wyer (guitar, piano, field recordings and manipulations) playing and improvising  from a ‘time-structured score’.

Chelsea-Chelsea for 2 saxophones, string quartet, guitar, electronics and 2 readers was commissioned by the Juilliard School in New York and performed simultaneously live in New York and London in April 2005. The premiere performance was given at the Chelsea Gallery, New York, with a second performance at Jazz at Lincoln Centre – with a live London link coming from the 606 Club, Cheslea, London.

In his ongoing work with the Orchestra Of The Swan Pete has created a variety of exploratory works combining scored music with improvisation, electronics and found sounds, including settings inspired by Shakesperian sonnets (Sonnet CXXX for string quartet plays on this page of the website).

“Modern dance and ballet have been great teachers for me, pushing me to take new paths and try different approaches.” Pete M Wyer

Pete has collaborated with many choreographers, including Jessica Lang for the large-scale work Senbazuru, a ballet score with opera singers, commissioned for the centenary of Juilliard in 2006, which featured the dance division of Juilliard, the Juilliard orchestra, conducted by Andrea Quinn and four opera singers. 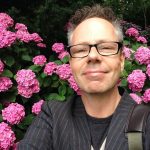 Pete M. Wyer is a self-taught musician and composer who plays classical guitar and piano and is an occasional singer. He began musical life playing and touring internationally w
ith rock and jazz bands in the 1980s and later giving solo classical guitar recitals. Many of his early works were songs or solos written for guitar (he is currently compiling a CD of his
classical guitar pieces). Pete also worked as a music teacher (1992-7) and remains passionate about music in education.

Pete has received a number of international fellowships and a ‘Best Composer’ award for his orchestral score The Far Shore in 2011 at the Fringe Report Awards. The citation reads:

‘The award celebrates the glorious work of classical composer Pete Wyer across film, ballet, concert and opera including 57 Hours, Numinous City, Listening To The Sky. In particular it celebrates the extraordinary ballet A Far Shore (2010) recorded with the London Symphony Orchestra and originally commissioned for performance by English National Ballet & Shanghai Ballet. The award salutes an artist of outstanding creative and intellectual integrity.’