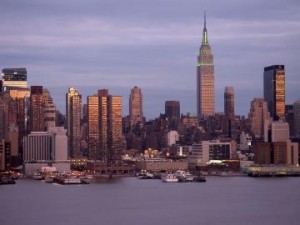 The project entails creating a multiple-speaker installation suitable for galleries and public spaces.

The premise of the installation is very simple: multiple locations are recorded simultaneously and played back across a multiple-speaker system, which is placed in a circle, giving a ‘God’s ear perspective’ of the world.

The result is that we hear many points simultaneously, so for example, if we have simultaneous recordings of a street, we hear cars, people, birds etc, moving around the circle of speakers at different speeds.

The first Simultaneity recording was made in New York City, with the help of Caryn Havlik and a team of volunteers from WNYC radio on a freezing saturday in November 2004.

A world-wide simultaneous recording was made on December 16th 2004 from 6.50 – 7.10 pm GMT which included more than 40 people in 23 countries – participants were asked to record bells, clocks, wristwatches, strking the hour – results included huskies in the Yukon, clock shops in San Francisco, church bells in London, France, Germany, train anouncements in Northern Ireland, dawn choruses from New Zealand, motorbikes and Ragas from Mumbai and many more.