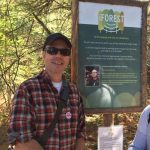 PETE M. WYER is a composer and musician from England. He has created scores for the London Symphony Orchestra, Royal Philharmonic Orchestra, Juilliard, the orchestra of Welsh National Opera, The Crossing, BBC Television and the Royal Opera House as well as creating seven operas and music theatre works.

Please note that details of Pete’s Immersive Forest or ‘iForest’ can be found at www.iForest.org

Despite the immense challenges, Pete had two large scale installations in 2020:

‘The Sky Beneath Our Feet’, a choral installation featuring 72 voices with orchestra, played back via 72 independent audio speakers ran at Descanso Gardens, Los Angeles, from April through September. The final movement of the work can be seen here:

The 24 speaker installation ‘I Walk Towards Myself’ ran at Manitoga, New York state, from July until October 12th.

Pete also created film of the creative process behind these works which can be seen here:

The opera ‘Ga Sho, May You Be Loved’  which uses 24 independent speakers that surround both performers and audience, developed by the American Opera Project (New York) with libretto by Melissa Salmons and Pete M. Wyer, directed by Tenzing Sonam and Matthew Gray, will receive now its world premiere at DOX in Prague in the autumn of 2022.

In 2016 Pete was commissioned by WNYC’s New Sounds Live to create Song of the Human as both an installation and concert work which was performed by The Crossing choir with an immersive soundscape at the Winter Garden, Manhattan. An excerpt can be heard in the film below:

The WNYC broadcast can he heard here: New Sounds Live on WNYC.

Pete’s innovative, Manhattan-wide And Death Shall Have No Dominion, a setting of Dylan Thomas for the centenary of his birth in 2014,  performed by a synchronised headphone choir distributed across Manhattan, synchronised via a specially created app on smartphones and tablets, can be seen in the film below:

In 2015 he was the composer and Musical Director for the 175th anniversary of Cunard in Liverpool and drew crowds in excess of 60,000:

Pete has received a number of international fellowships and a ‘Best Composer’ award for his orchestral score The Far Shore in 2011 at the Fringe Report Awards. The citation reads:

‘The award celebrates the glorious work of classical composer Pete Wyer across film, ballet, concert and opera including 57 Hours, Numinous City, Listening To The Sky. In particular it celebrates the extraordinary ballet A Far Shore (2010) recorded with the London Symphony Orchestra and originally commissioned for performance by English National Ballet & Shanghai Ballet. The award salutes an artist of outstanding creative and intellectual integrity.’

Audio clip: Adobe Flash Player (version 9 or above) is required to play this audio clip. Download the latest version here. You also need to have JavaScript enabled in your browser.